I’m pleased to announce that today we’re releasing a new snapshot of Cubiquity for Unity. This version finally adds support for both OS X and Linux, and also includes a number of smaller improvements regarding stability, user interface and documentation. 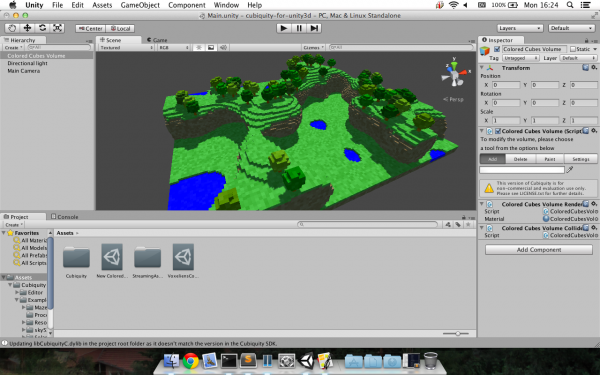 Cubiquity for Unity running on OSX

You can download this latest snapshot using the links below (remember to check our YouTube channel for examples of what Cubiquity for Unity can do):

One of the main appeals of Unity is the ability to target multiple platforms from a single code base, and so we’ve always been keen to bring this functionality to Cubiquity as well. The process is more complex than for other Unity assets because Cubiquity is a native code library written in C++, and so it needs to be compiled (by us) for each platform which we want users to be able to target.

Matt kicked off the work a few weeks ago by compiling Cubiquity for Linux. This involved writing some CMake scripts, testing the process of loading dynamic libraries on Linux, and fixing some OpenGL issues. All of this helped lay the foundations for the OS X version, which then required extra tweaks to the the build process and handling of log files. But eventually it came together 🙂

We haven’t added any significant new features beyond the improved platform support, but there has been more work on polishing the API and particularly on documenting it. The final release will naturally include API docs and a user manual to get you up to speed quickly, but we’re also hoping the API will be simple enough to be intuitive.

We currently expect that this is that last snapshot which we release before we put Cubiquity on the Asset Store! The end is now really in sight and we hope to be live by the end of this month.