As part of the next release of PolyVox, we’re going to have the first Python bindings available and supported as well as preliminary support for C♯ bindings. This will allow easy integration of voxels into the technologies you’re already using.

For a long time now (at least 4 years) we’ve had some form of Python bindings available for PolyVox, created via the SWIG tool. If you were paying attention in those days, you would have seen that the bindings were often broken or even disabled from building completely. This was largely due to the fact that PolyVox was a fast-developing piece of software without a stable API. We didn’t want to slow down the development of new features by having the impedance of also having to update the bindings.

However, since we starting making proper numbered releases (beginning with 0.2.0 last year) the API has settled down and we’re making promises about how much (or little) it will change. This makes it a much more suitable target for building bindings to other languages.

My main target for the next release of PolyVox (0.3 when it’s out) has been improving and polishing the bindings for Python. In addition to the Python bindings, I have also enabled the building of C♯ bindings for those who would like to try those out too. The Python bindings are better supported however (we have nightly tests run on them, documentation and a demonstration example) and are less liable to change.

If you’re interested in taking a look, then I’ve uploaded a first draft of a section documenting the Python bindings which introduces the bindings and goes through a short code example. That short example is expanded as a full example in the usual example location, PythonExample.py, which renders a blocky sphere to the screen using Python, PyOpenGL and PyGame without a single line of C++ needing to be written. 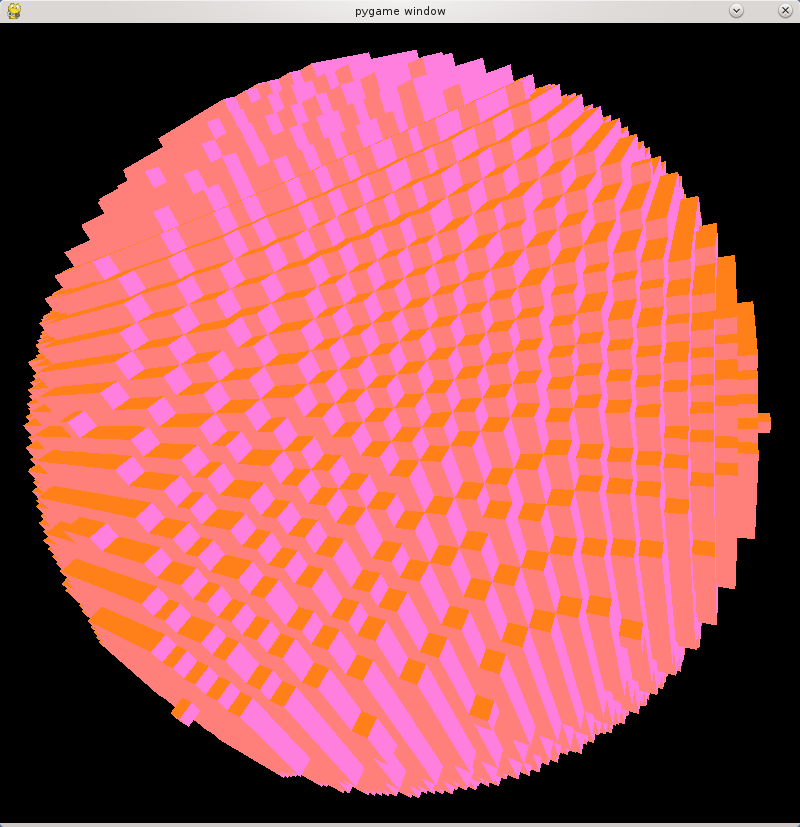 A voxel sphere rendered though PyOpenGL

For example, creating a volume is as simple as

You can set the value of any voxel with a single call like:

The unusually long names for the classes is an artefact of SWIG being able to represent all the varieties of C++ template instances. You’ll also notice that the API is not very Pythonic at present. I’m trying to get all the functionality working before adding another layer of Pythonicness.

All of the above is already in the develop branch of Git already so feel free to try it out. If you have any question please do ask in the comments below or in the forums.

In a future post I’ll detail some of the technical challenges I’ve faced to get all of PolyVox’s functionality working in both Python and C♯ via SWIG.