Yesterday was the second (and final) day of the Develop Conference in the UK and once again it was great fun. It was a little quieter than the first day, but this was a welcome break as it gave us more time to talk to people in depth.

We’ve had plenty more people come by to play the game, and you can see one session in action in the picture below:

A visitor to the stand plays through Voxeliens while Matt watches.

Some of the players have been really quite good, with one player in particular getting to level 10 and achieving a high-score of 55470. I’ve never got to level 10 myself and it’s a pretty terrifying place to be! By the end of the conference the high score table looked as follows: 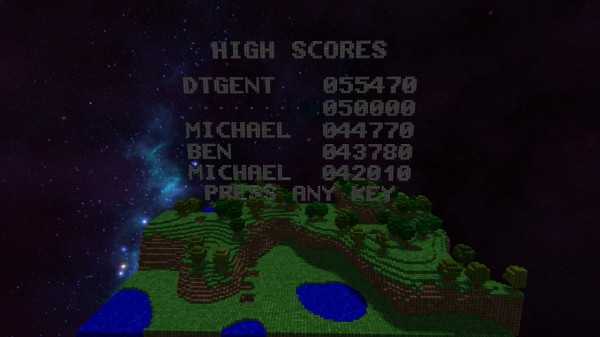 'DTGENT' was the only player to break through the 50000 barrier. Well done!

We also got interviewed by Playr but I kept glancing at the camera instead of the interviewer so I’m not sure if they’ll use the footage. There was no preparation time so I was just making up stuff to say on the spot 🙂 Well, I’ll post here if it does get used.

Although the conference is now over, Matt and I are going to be in the same place until the weekend (we’re usually in different countries) so we hope to sit down and discuss our plans for the future. Stay tuned for more information once we’ve done this.

One thought on “Second Day at Develop Conference”